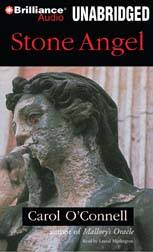 At their heart is NYPD sergeant Kathleen Mallory, a wild child turned policewoman possessed of a ferocious intelligence and a unique inner compass of right and wrong which has drawn her now to a place far from home.

In a small town in Louisiana, Mallory steps off a train. Within an hour, one man has been assaulted, another has had a heart attack, a third has been murdered, and Mallory is in jail, although she has had nothing to do with any of these events. She is there for an entirely different purpose.

Seventeen years ago, Mallory s mother died in this town, stoned to death by a mob, and the six-year-old Mallory vanished, to reappear later on the streets of New York. Now she has returned to find out who killed her mother, and what happened to the body, vanished as well, its only trace a winged angel in the local cemetery. Her search will take her through a dark and murky past, and into the company of people who have much to warn her about and even more to hide, but for Mallory there is no stopping even if what she discovers is something better left buried in the grave.

Filled with the rich prose, resonant characters, and knife-edge suspense that have won her so many admirers, Stone Angel is Carol O Connell s most remarkable novel yet.