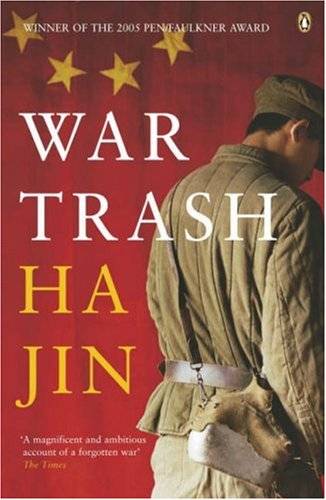 Jin (Waiting; The Crazed; etc.) applies his steady gaze and stripped-bare storytelling to the violence and horrifying political uncertainty of the Korean War in this brave, complex and politically timely work, the story of a reluctant soldier trying to survive a POW camp and reunite with his family. Armed with reams of research, the National Book Award winner aims to give readers a tale that is as much historical record as examination of personal struggle. After his division is decimated by superior American forces, Chinese 'volunteer' Yu Yuan, an English-speaking clerical officer with a largely pragmatic loyalty to the Communists, rejects revolutionary martyrdom and submits to capture. In the POW camp, his ability to communicate with the Americans thrusts him to the center of a disturbingly bloody power struggle between two factions of Chinese prisoners: the pro-Nationalists, led in part by the sadistic Liu Tai-an, who publicly guts and dissects one of his enemies; and the pro-Communists, commanded by the coldly manipulative Pei Shan, who wants to use Yu to save his own political skin. An unofficial fighter in a foreign war, shameful in the eyes of his own government for his failure to die, Yu can only stand and watch as his dreams of seeing his mother and fiancИe again are eviscerated in what increasingly looks like a meaningless conflict. The parallels with America 's current war on terrorism are obvious, but Jin, himself an ex-soldier, is not trying to make a political statement. His gaze is unfiltered, camera-like, and the images he records are all the more powerful for their simple honesty. It is one of the enduring frustrations of Jin's work that powerful passages of description are interspersed with somewhat wooden dialogue, but the force of this story, painted with starkly melancholy longing, pulls the reader inexorably along.

From The New Yorker

Ha Jin's new novel is the fictional memoir of a Chinese People's Volunteer, dispatched by his government to fight for the Communist cause in the Korean War. Yu Yuan describes his ordeal after capture, when P.O.W.s in the prison camp have to make a wrenching choice: return to the mainland as disgraced captives, or leave their families and begin new lives in Taiwan. The subject is fascinating, but in execution the novel often seems burdened by voluminous research, and it strains dutifully to illustrate political truisms. In a prologue, Yuan claims to be telling his story in English because it is 'the only gift a poor man like me can bequeath his American grandchildren.' Ha Jin accurately reproduces the voice of a non-native speaker, but the labored prose is disappointing from an author whose previous work 'Waiting' and ' Ocean of Words ' is notable for its vividness and its emotional precision.
Read this book now
Download in formats: fb2 308k, epub 536k, mobi 590k, txt, html