The Book and The Sword 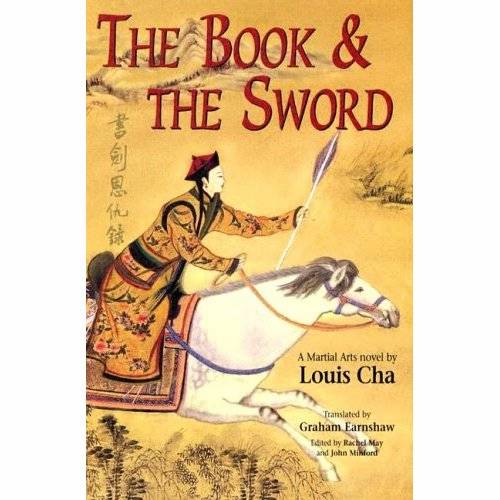 Оценка: 2.6 (16)
Genre: adventure
Annotation:
In the Book and Sword, Louis Cha revives the legend about the great eighteenth-century Manchu Emperor Qianlong which claims that he was in fact not a Manchu but a Han Chinese as a result of a 'baby swap.' The novel is panoramic in scope and includes the fantastical elements for which Cha is well-known: secret societies, kungfu masters, a lost desert city guarded by wolf packs, and the mysterious Fragrant Princess.

Like the martial art heroes that he writes about, Louis Cha is a legend in his own time. Better known to his Chinese fans by his pen name of Jin Yong, Cha is the unrivaled giant of the modern martial arts (wuxia) genre. His novels were initially written for serialization in his own Ming Pao newspaper, which was published in Hong Kong. However, they became so popular that they were reprinted in Chinese newspapers around the world. His novels, which total fourteen, were subsequently published in book form. His accomplishment was magnified by the fact that during this time Mainland China was a literary desert because Communist rigidity only allowed publication of titles that conformed to socialist realism, i.e, it had to help build socialist ideals. Definitely, no room for escapist kung fu adventures there.

Alas, in spite of his stature, his works were only accessible to Chinese readers. Although the novels were initially written between 1955 and 1972, it was not until 1997 that the English translation of 'The Deer and the Cauldron' was published by Oxford University Press (and that was only the first volume of three!). Although that translation of Cha's last and, many argue, his best novel was excellent, it still left something to be desired because 'The Deer and the Cauldron' was not representative of the genre. Therefore, it is with great excitement that we awaited the publication of the 'The Book and the Sword', Cha's first novel earlier this year. The novel was initially translated and published on the web by Graham Earnshaw in 2001 but it was picked up by Oxford University Press in 2003 and edited by Rachel May and John Minford. Mindford was the translator for 'The Deer and the Cauldron'. The book finally became available earlier this year.

'The Book and the Sword' takes place during the reign of Emperor Qian Long (1735-1795) of the Qing dynasty. The Qing dynasty had been founded by the Manchus almost 100 years earlier. By this time the Manchu rulers, whose homeland was in the north east of present day China, had been thoroughly sinicised. Qian Long himself was a great patron and practitioner of Chinese culture. Nevertheless, there were still resistance groups formed by the Han majority. The story follows one of these secret societies, the Red Flower Society, whose members are determined to overthrow the Qing. The members of the society are a colorful bunch of characters, most of whom are men but they also include several women in their ranks (the woman are all beautiful and deadly, of course). The members come from a cross section of the society but have been brought together by their wilingness to risk life and limb to protect the weak and fight for justice. The newly elected leader of the society, Helmsman Chen, is an unlikely hero whose manners and knowledge reveal a priviledged upbringing as the son of a former prime minister. We join the group as they repeatedly fail to free one of their own, Rolling Thunder Wen, who is being escorted to the capital under heavy guard. Rolling Thunder, you see, happens to know about a deadly secret: that the emperor was actually born to a Han family but swapped with a Manchu baby girl. Helmsman Chen discovers this secret himself soon enough and hopes to convince the emperor himself to evict the Manchus. What Chen doesn't know, however, is that the origin of the emperor is related to his own selection as the leader of the Red Flower Society. Much of the action actually takes place in the western border of China in present day Xinjiang, home of the Uighurs, whom Helmsm
Read this book now
Download in formats: fb2 419k, epub 695k, mobi 836k, txt, html

While there are a lot of bits where it's obvious this was translated (strange turns of phrase or bits of poetry that aren't particularly good in English) the main story should be good for anyone who's a fan of KungFu films. It's not so much the idea of action (which is prevalent) but that the book does a pretty good job at fleshing out the world. Lots of sects are mentioned, allusions to unspoken rules of jianghu conduct are included, and all of the characters are well planned in such a way that nobody does anything without motivation (even if they aren't particularly deep people).